Here is more news from my friend John and cricket world 20/20 semi-final. 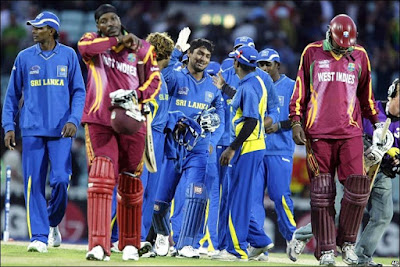 Since my last entry on to this blog, thrilling two weeks have passed in the World Cricket Cup. One by one the teams have been eliminated, with England failing to make the semi finals, beaten by The West Indies in an exciting rain affected match in London, Australia, knocked out in the first round and holders India, beaten by England in a rare victory. The greatest surprise was the exit of my favourites for the title, South Africa, beaten by Pakistan in the first Semi Final. The South Africans have a reputation as 'chokers' which means when they get to the gransen of victory, they lose! This is w well earned reputation. Pakistan had already been beaten twice in the competition, once by England, which itself shows how crap they really are.

So on to today's final at lords in London, the Wembley Of Cricket. Pakistan will play Sri Lanka, who crushed West Indies in the semi finals. There is a special significance to this game. Last March, before a game between the two countries in Pakistan, the Sri Lanka tour bus was ambushed by the usual assortment of muslim ragheads intent on converting the unconverted to their way of thinking by the use of terror and bullets, with an odd grenade thrown in for good luck. Seven Sri Lankan crickets were injured and six policemen and the bus driver were killed

So today's clash has a special meaning for supporters of both teams and lets hope cricket is the winner and that Sri Lanka, twenty years ago not even a recognised cricket playing country, can win their second major honour.

As for my country England, well they have some extra time to prepare for this summer's big one, the five test series against Australia. No sporting fixture means so much as this one. England beat them 2 games to one four yeaars ago and it could and should have been 4-1
but for the weather. This was followed in 2006 by a humiliating 0-5 defeat in Australia which I had the 'pleasure' of witnessing, travelling to the first test in Brisbane. As for the Aussies, since they were knocked out of the 20\20 they have been living in Leicester. Their captain Ricky Ponting was not looking forward to two weeks in Leicester. What a shame.

Meanwhile, in a similar competition, England's women are about to beat New Zealand in the final at Lords. Similar to Sweden and women's football, women's cricket is popular here in England.