What a great weekend!

So now is it over for this time and this year! The "boys" from England have been here over the weekend for the regular journey to Göteborg as they now have done for many years! We have been to Galliano and listen to good rock music and even a song with Tom Jones, just like that! The band called Canned Rabbit Stew! We were invited to Maskens house at lunchtime on saturday and he offered a delicious fish soup, thanks Masken! 4 o´clock saturday we went to Hemmaplan and watch Premier League, first Spurs vs Birmingham and Spurs won by 2-1, the second goal in 95.04 minute, lucky you Spursfans! We also witness Manu beat Scum Arsenal with 2-1, lucky for us Manu fan that Diaby in Arsenal did a great owngoal! 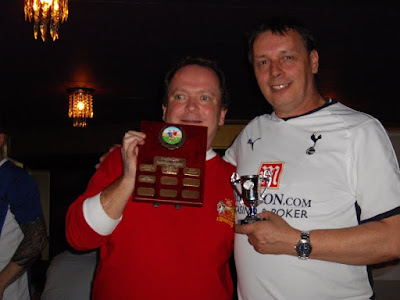 After the two footballmatches we had an Swengland Ligan awards and here is the masterleague winner for 2008/2009! Mr. Mike Dawson manager for Dead And Dynamits

Sunday we went to see Blåvitt vs Elfsborg at the new Old Ullevi. it was fantastic, it was soldout and what a atmosphere, lovely! All the guys loved it and Blåvitt won by 4-0, Great show from IFK! 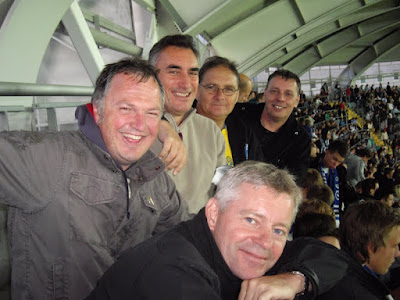 Monday was a day on the town shopping and eating visiting friends and so on! I have had a great weekend with my english friends and i hope they have had it aswell! Cheers, guys!

I wanted to say a HUGE thank you to all of you in Sweden for our recent trip. Rustan you were a fantastic host and I shall try my best to treat you as well as you trated us when you visit us here in the UK soon. Please pass on my thanks to everyone else too - I had a great time!

Take care and be happy