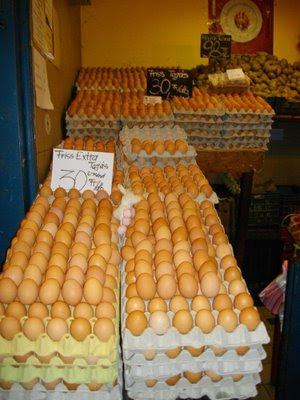 "But can such an excessive egg habit really be good for you?
After the debacle of the salmonella scare sparked by Edwina Currie in 1998, eggs are firmly back in fashion with Britons - we now eat 28 million a day.
Part of the reason for this increased popularity, say experts, is the emerging evidence that eggs in moderation are not as bad for us as was once thought.
Where as it was once recommended that egg consumption was limited to three per week to avoid a rise in blood cholesterol levels, the government's Foods Standards Agency (FSA) now puts no upper limit on the number of eggs you can eat in a week as long as they form part of a healthy, balanced diet.
'Eggs got an undeserved bad name because we used to be told that the cholesterol in the yolks would raise blood cholesterol levels,' says Anna Denny, nutrition scientist at the British Nutrition Foundation.
'However, that is now known not to be the case. Blood cholesterol levels are raised by a diet high in the saturated fats often found in pastry, processed meats, biscuits and cakes; the cholesterol in other food, including that in eggs, is not to blame.'
Even a nine-egg-a- day habit is unlikely to cause significant cholesterol provided the rest of the diet is balanced, low fat and healthy, says Denny.
Two years ago, Dr Bruce Griffin, an expert in egg research at the centre for nutrition and food safety at the University of Surrey, analysed 30 egg studies carried out over 30 years.
He found eggs 'have no clinically significant impact' on heart disease or cholesterol levels.
Meanwhile, a study from Harvard University showed that people eating one or more eggs a day were at no more risk of cardiovascular disease than non-egg eaters.
In fact, in his most recent study, published in the European Journal of Clinical Nutrition this summer, Dr Griffin showed that two eggs a day might help people cut cholesterol levels, not raise them.
He gave overweight, but otherwise healthy volunteers, two eggs a day for 12 weeks; they also followed a reduced calorie diet prescribed by the British Heart Foundation (BHF).
A control group followed the same BHF diet but cut out eggs altogether. Both groups experienced a drop in the average level of blood cholesterol and also lost between 7-9lb in weight.
'Eggs make a nutritional contribution to a healthy, calorie-restricted diet,' says Griffin.
'We've shown that when two eggs a day are eaten by people actively losing weight on a calorie-restricted diet, blood cholesterol and weight can be reduced.'
Egg are relatively low in calories - a large one contains only 75 calories (the equivalent of a small banana) and 5g of fat.
In a study at Wayne State University in Detroit, published in the Journal of the American College of Nutrition, scientists looked at the breakfast habits of overweight and obese women.
They found that when the women were given either an egg or bagel breakfast, each providing the same number of calories, the women eating the eggs felt fuller, were less inclined to snack on fatty foods and consumed less calories overall in the following 24 hours."