HOSTS HUMBLED BY THE DUTCH!

Hi! Below you might read my friend Johns report from a cricket match between England and Holland, who won do you think??? 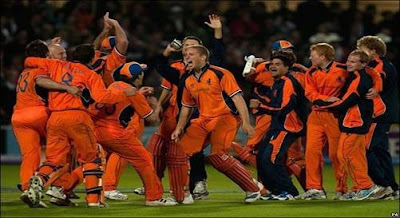 "It might not mean much to you Swedes, but England, who devised this latest form of the essentially English summer sport, have just been beaten by Holland in the opening match of the Cricket 20/20 World Cup. 'So What' I hear you say, 'Holland are always good' but no, hang on, this is the equivalent of Sweden losing to England at ice hockey for God's sake. AND it was at the headquarters of the game - LORDS in London. Fan det va en morkt tid i gar (f-ck it was a very bad day yesterday/R). England needed to win this game against the KALKON LAG (turkey team /R) before they meet PAKISTAN tomorrow. This will be more like Sweden V Denmark for example, a tougher game. We will probably smash them. We have to or the 'tavling ar slut innan det borjar.' ("competition is over before it starts"/R)

Cricket, what's that then? Well I have not got the time or space to write it all down but really it's a game we taught the World, our World, or The Empire to play way back in the 1800's. Trouble is, they have all got pretty good at it now. Australia, touring England this summer and playing us for 'The Ashes' (another story), are always beating us. They beat us at the one day game, 20/20 three hour game and the game that matters, the FIVE DAY game , or TEST CRICKET as it is called. BUT in 2005 the whole country watched in amazement as we beat them 2 matches to 1 and took THE ASHES trophy. It did not last long, I went to Australia where they took revenge 5-0! SO here we are at the start of another long summer. It's started badly so it can only get better.