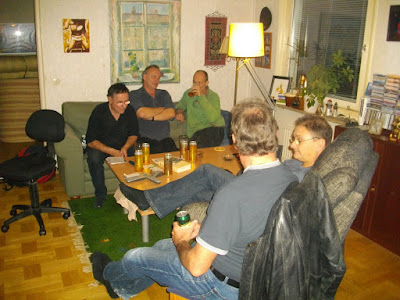 My friends Andy, Alan, Carl, Håkan and John at my house, thursdaynight, good fellows!
And yes it´s not over yet! It´s only fridaynight and we´ve have had a great time so far! I mean the time together with my friends from England who come to Göteborg at thursday and at that day we were going out for listen to the blues, yeah, some good music, but we couldn´t come to KoM Bar where the band should play because of this selfbomber man who did a kaos in Linnéstan and every street near KoM Bar was blocked! So what to do? We went to Usit instead for some beers and a lot of good chat! Here´s a good story about that thing and the next morning from my mate John!
. 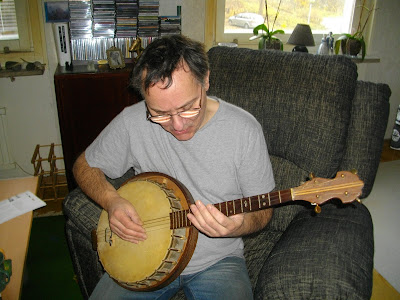 The second Swengland trip is well under way as I write this.Managers Richardson and Strohmeier whose teams are currently neck and neck at the top of the Premier, have finally, following the trials and tribulations of August's failed attempt to travel here, made it to Goteborg. Ryan Air of course, through their useless website, tried their best to prevent us but we made it nevertheless. But it seems the Marsupials manager wanted to make the trip even more exciting by having an early morning encounter with the local Polis. Luckily for him the officers in question were in his words 'a couple of crackers' However it was him they regarded as crackers as he climbed the hill opposite Rustan's apartment block in the vain hope he could identify the apartment by looking through the window. Unfortunately this was a misguided tactic:

The previous night we had been prevented from going to our local and favourite music bar(KoM Bar) by the said Polis department due to a suspected suicide bomber standing at a nearby tram stop. The bomber situation lasted all night and was only cleared away this morning. I imagine the local residents were still jumpy from the previous evening when they saw a lone, hatted figure climbing the slope opposite Rustan's flats. The figure then proceeded to peer towards the windows. This, combined with the fact that Rustan and other residents had their flats broken into in the summer caused one of the residents to call the Polis. Strohmeier was then apprehended and asked to prove his identity. Interestingly, his tactic should have worked, as he was hoping that one of us would have seen him from Rustan's flat. Indeed Rustan and Andy had seen the incident, and had remarked that there was some Polis activity opposite and it looked as if 'a drug addict was being arrestsed'. Little did they realise who 'the addict' was. Anyway, alls well that ends well and thanks to the help of a little old lady who suggested reading the name plates on the apartment main doors, Strohmeier was united with his breakfast which is what he was really searching for."
Okey, later today, friday we went to see Bruce at MUG and he had a new story to tell us, now about when the former bassplayer of Jimi Hendrix went in to his shop for rent a bassguitar, and i´ll tell you that´s was agood story! We all love Bruce and Bruce love us aspecially John and Andy, the real englishmen! We had a great dinner at Gyllene Prag with Johans special and panerad ost, lovely! Then we had to go for a promotion tour Melinski, John and me. The Cheats would like to comeback in june 2010 and play, so we went to, listen now! Jazzhuset, Henriksberg, Musikens Hus and Jazzå and give them a cd and posters, just like that and now we hope they will have some gigs here then! Later on we met up again with our other friends, Alan, Annika, Gotland, Anna, Carl and Andy from Gyllene Prag, now at the lovely club KoM Bar where we listen to this very great band, Sture Elldins Blues Band with friends and one of the best in Sweden keyboard player Mr. Bo Hansson, what a musician and Sture played so very good harmonica, great! We ended up the night with a beer(John white wine, scumbag) at Karlssons Garage. Tomorrow saturday it´s a big footballday, first out scum verses scum, oh, sorry Arsenal v Spurs, then Bluesjam at Jazzå 16.00 to 19.00 and then football again Manu v Blackburn, after that to Kom Bar again to listen to a jazzie band a´la Herbie Hancock style! What a day it will be, i hope! And then Sunday, i thought it was monday as usual the boys from England going back home, thank god for that! No, i´m joking, i love you because!!!!!
. 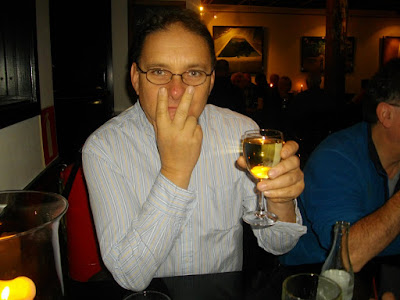 Johnt "the scumbag Spurs" have been starting drink white wine after 56 year, what a plonker!
. 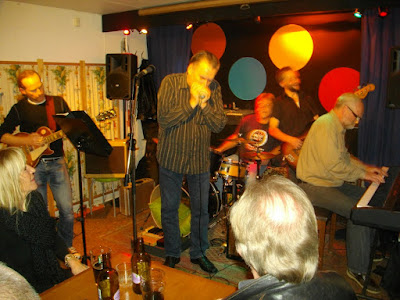 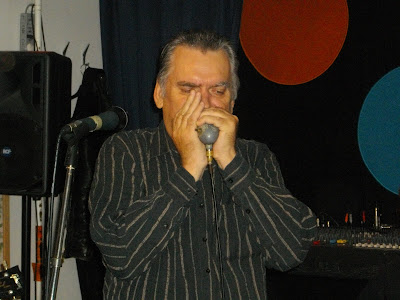